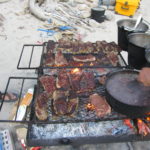 One of the most quinnesential aspects of multi-day river trips is the long-held tradition of Dutch oven cooking. When thinking of food one eats while camping, minimalist meals of instant noodles, oatmeal, MREs, or chips, hotdogs, and s’mores may come to mind for many. While the backpacker meals certainly have their place, for those seasoned in Dutch Oven cooking, there may be reminisces of egg frittata, freshly baked cornbread, fireside lasagna, a perfectly seared cut of meat, or a rich chocolate cake.

The Dutch Oven one sees today is often a 8”-12+” heavy, flat-lidded cast metal pot or pan that allows for baking to be brought into the kitchen or backcountry in a way that is extremely portable. With heat applied underneath and on top of the pot, often with coals, the heavy metal and pot’s shape allows for induction that keeps the vessel at a consistent temperature comparable to a standard oven.

The design first originates from a “braadpan” in the Netherlands, which roughly translates to a roasting or frying pan and were made of copper and brass. In the 17th century, the Dutch thought that they could improve upon this model and began casting a wide range of cast iron pots, pans, and casserole dishes in a sand mold, which proved to be highly superior to the other loam and clay models across Europe. Not only were the metal casts more economical, efficient, and durable, while also allowing for a smoother cooking and baking surface. The term “Dutch oven” was coined from this model, but was slightly altered when Europeans brought the design to the Americas and legs and a flat lid were added to allow for coals to be added to the surfaces. While cast iron is still around, you will often also see models that are made of aluminum, which is more lightweight and portable.

*Can also sub a cornbread mix for simplicity